Recently I completed work on a network of sites: GoRowan.com, High-Rock.com, and spencer-inn.com. On these three sites, I developed a Content Management System in PHP and MySQL.  I developed a company index based loosely around the Yahoo category system.  And finally, I built several banner ads for advertisers on the sites.  By building out this solution I was able to save the owner effort, both in adding and maintaining posts to these sites, but also in listing companies found in his community.

The goal for this design was to give the sites a more current, professional interface and eliminate a lot of the manual management the site took.

Developing the database system took less than two days’ time.  The back-end interfaces took another few days, and the front end took approximately one week.  The results, when compared to the original layouts and amount of time it took to maintain speak for itself.

The one thing I learned from this project was to completely specify the scope of the project in writing before beginning work.  I also learned to base rates on hours of work, rather than output of work.  I also learned that an ongoing support rate needs to be agreed upon before turning over the source code.  I also learned much later that I will outsource any further graphic design work.  That’s a specialty I don’t wish to get into. 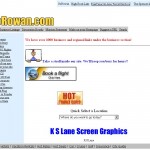 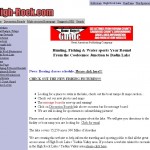 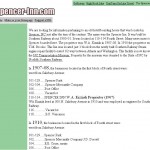