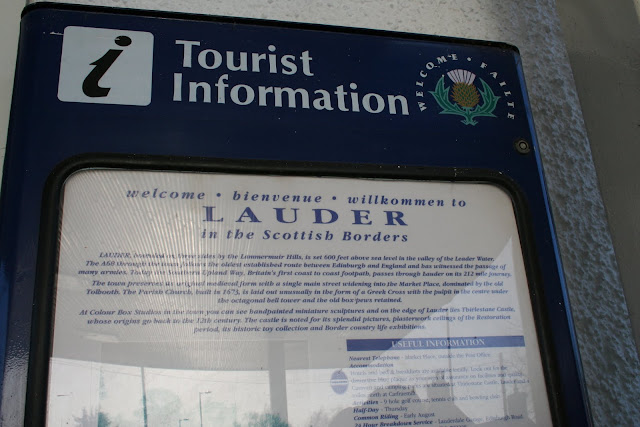 I’ve been interested in history for as long as I can remember. About ten years ago, I turned my interest in history into a search to find out where my family comes from.  What was our story?  In this search I found that among other things the name Lowder has had many spellings.  But all of them can trace their history back to the Celtic tribes of northern Europe.

As I began tracing that history, I found that my family came through Scotland.  In fact, there was still a town that bears my family name.  I was determined to go and spend some time in the land of my fathers.

My wife and I flew into Edinburgh, rented a car, and with no sleep in the past day, headed immediately to Lauder (wikipedia article).  One of the many things I learned on this trip is many of the attractions of Scotland aren’t open in March, especially those that aren’t considered popular.

This included Thirlestane Castle (wikipedia article).  We were able to get onto the grounds, but we weren’t able to get into the estate.  While large grants of land in Berwickshire and the Lothians (1) belonged to Robert Lauder (several spelling variations in the history books), the current castle that stands here was the home of the Maitland family.  So I wasn’t too upset we couldn’t get in to see more of the castle.

After taking a few pictures, we headed back into town to check it out.  The town was old, records show it was established as early as 1124.  But even with a  town this old, there were signs of all things modern.  On the hills just north of Lauder, there were more than 20 giant windmills generating power.  On the southern end of town, there is a new housing development with over 100 new homes.  They look as if they could be anywhere in the US.

It’s hard to explain how I felt standing there in a town bearing my family name.  It was unreal.

After spending just a few hours there, I decided I wanted to see more of my family’s history.  I made my way to North Berwick and Bass Rock.  The island was given to the family and a castle was constructed there.  Again, no tours were open to take us out to the island, but we were able to see the island from shore.

I also made my way over to the Old Kirk, to try and find the grave stone for Sir Robert de Lawedre, great laird of The Bass, who died May 1311.  The good news is the city council of North Berwick is trying to maintain the Old Kirk… The bad news is I couldn’t get inside the Old Kirk to determine which gravestone was his.  I plan on trying to reach out to someone working on the site, and have them help me identify which stone is his.  It’d be really awesome to know.

After taking in the rest of North Berwick, we headed into Edinburgh.  We were pushing 30 hours without rest, and I was ready to grab a quick nap!  I had seen where my family had lived nearly a full millennia ago.  I’m still processing all the things I got to see while there.  I can only say again and again, I had an amazing time!  I’m definitely going to go back.  There is just so much to see in Scotland, one week is no where near enough.

I’ll write up day two very soon!  For now… I need to catch up on some overdue work.