We have to choose a column or columns that will uniquely identify a row in a table.  Sometimes this column will be one or more of the columns you’re storing.  That’s the case in the PhoneNumber table.  Each phone number is unique.  If we entered the number in the table twice, it wouldn’t mean two different phone numbers would it?

But sometimes, there really isn’t anything in the data that uniquely identifies the row to the table.  That’s what we have in the Customer table.  Think about it, if we have two rows with John, Smith, you really don’t know if that’s one person or two, right?  In the case where you don’t have a uniquely identifying attribute, or column, you have to add your own column that you’ll use to uniquely identify each row.

So, let’s add primary keys to our Customer and Address tables.  For both of these tables, we’re going to use an integer to uniquely identify each row to the table.  That integer cannot be re-used.  Once it’s assigned to a row, that’s the only row that will ever be represented by that integer.  If you’re more familiar with SQL Server, you know we’re talking about an IDENTITY() column. 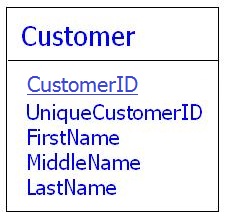 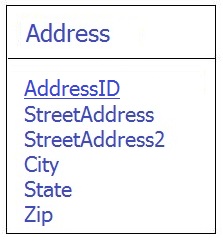 We’re not going to make any changes to our PhoneNumber table at this time, for now, we’re going to use the PhoneNumber column as the primary key in that table. 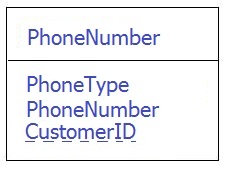 Now that we have a way to uniquely identify each row to the table, we can relate a row in one table, to a row in the other table.  To do this, we’re going to add a column to the table and store a copy of the primary key for the row we want to relate to.  Let’s start by relating an phone number to a customer.  We want to design this relationship in such a way that each phone number can belong to only one customer.

To make this relationship work, we need to save a copy of the CustomerID that the phone number row will “belong” to.  So let’s add the column CustomerID to the PhoneNumber table.

But look back at the data we’re going to get in the source file.  We’re going to receive home, work, and cell numbers for both the customer and their spouse.  In reality, we need a 1-to-many relationship.

We can use the design as we’ve made it to support a 1-to-many.  For each number we want to enter, we just add a row to the PhoneNumber table, changing the phonetype to reflect the type of phone number being stored.  Then for each CustomerID you can have one or more phone numbers on file.

You could also consider this as a relationship from phone numbers to customers.  If you did, then this relationship would appear to be a many-to-1 relationship.  Both are valid, it’s all a matter of perspective.  The further you get into database design, the more you’ll find the answer is “it depends.”

A mapping table is a very narrow table, often only including two foreign keys.  It allows you to list all the relationship between records in two different tables.  Let’s look at the source file. Notice how there is only one address per record, but there are two names?

Self or Recursive Reference 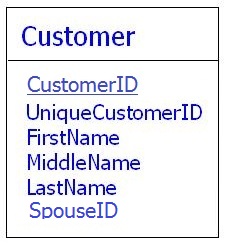 There is one final relationship type I want to cover.  It’s when one row in a table references another row in that same table.  It’s often known as a recursive reference.  It’s really useful when you’re relating two entities of the same type.  In our example we are sent two customers in each row, a customer and his or her spouse.  Both are customers.  But we need a way of relating one customer to another.  That’s where the self reference comes in.

We’re going to add a foreign key to the Customer table that references CustomerID.  We’re going to call it SpouseID.  This column will hold the CustomerID for the current Customer’s spouse.  Bonus points if you ask yourself would both customer records reference the other customerID!

Relating your tables takes little more than using a column to store data from another column.  This is the most duplication that you should have in a normalized database design.  If you start copying columns of text from one table to another, you may be heading towards de-normalization.  Just remember, the column that identifies a row to the it’s table is the primary key, has to be unique.  The column that identifies a row in another table is the foreign key, it doesn’t have to be unique.  You can also reference another row in the same table.  This is just the beginning, mastering referential integrity takes time, and you’re just taking your first steps down that path now.  Practice your designs, and if you have any questions about your designs, let me know.  I’m here to help!