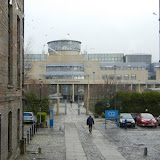 This is the slideshow from day two in Edinburgh, Scotland.  We got up early by Eastern Standard Time, but it wasn’t too early by local standards.

After a light breakfast, we hopped a double-decker buss to make our way to the Royal Mile and the sites in the old city.  The bus took us by the Scottish Government center, and after just a few stops we stepped off the bus to explore the city a bit closer than the bus would allow.

We were instantly surrounded by older buildings most were from the 19th century.  Looking at the new shops that filled the ground level of these buildings seemed odd.  Cell phone stores and Curry houses… they look so new, yet their inside these older buildings.  It was very cool!

When we topped that first hill, we could see the Salisbury Crags in Holyrood Park.  So we made our way down that hill and in to Holyrood Palace.  After seeing this place from the outside, we knew we had to go in.  I have a ton of pictures of that fountain in the slide show below.  You should check out some of the images carved into it.  We toured the interior too, but we weren’t allowed to take photos inside.  I will say this for the palace.  It has history.  From Mary Queen of Scots to today.  The thing that struck me most was the floors.  On the second floor there are wooden floors from the 1500s…and they’re still in use!

After you finish touring the inside, you exit to the rear of the palace.  What we found there was even more impressive than the palace,  Holyrood Abbey.  After gawking at the abbey, we headed out towards the rest of Edinburgh and the Royal mile.  We passed the Scottish Parliament Building.  And many more old buildings on the way to Edinburgh Castle. 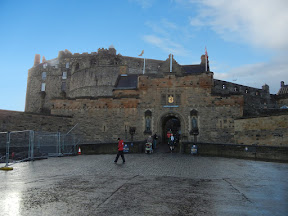 If you go to Scotland, this would be in my top 10 list of must-see places!  My camera started to die while I was here, so I didn’t caputure nearly as many images as I wanted!

The castle is home to the oldest structure still standing in Edinburgh, St. Margret’s Chapel.  This building dates back to the 12th century.  The sense of history is amazing.  Penny has a shot of me standing just outside the chapel.

The people were much smaller I think.  I had to duck to enter.

I have to say being in Edinburgh was something I’ve wanted to do forever, and finally being there, there was a feeling I would never forget the times I spent there.  I hope to hold on to that feeling the rest of my life.  I’ve shared my full gallery below.  Check it out and let me know what you think!